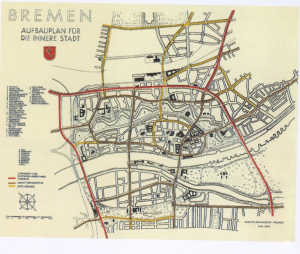 Is your head stuck in the 1970s? Most of us like to think that we fit well with the modern world. We appreciate democracy. We support equal rights for all. We are tolerant and open to new ways. Yet when it comes to transport policy, many of us can’t get out of 1970s thinking.

This is the problem that haunts Transport Transition advocates. We want to reclaim the cities for people by reducing the use of motorised vehicles. But whenever proposals are presented that will do just this, so many of us cannot think beyond the problems of 1970s traffic management. Where will the cars go if they can’t go here? How can shops get their supplies without lorries? How can residents park their cars if not in the street? Even transport activists find it difficult to get over this way of thinking.  For as much as it is embedded in official government policy, it is no surprise that the transport sector has failed miserably to reduce its carbon emissions.

The recent furore over Bremen’s chronic illegal pavement parking has highlighted how this has blighted politicians’ and citizens’ efforts towards a Transport Transition. Whereas cities like Amsterdam or Oslo are successfully reducing car traffic using a range of instruments, including financial measures to make on-street car parking less attractive, Bremen has been stuck with Germany’s ancient laws limiting, for example, parking fines in resident parking areas without the relevant permit to €30, (though this law is changing imminently).

It’s widely accepted that, if Europe is to achieve its greenhouse gas emissions targets, cities like Bremen need to play a big part. And it is clear that transport is now the one field of human activity that needs to step up to the plate and do its bit through effecting a meaningful transport transition.

Bremen’s activists and politicians who are trying to deliver such a transition, including the (Green Party) Transport Senator herself, find that their policy initiatives are regularly opposed, stifled, or radically watered down. Unsurprisingly, political opponents with vested interests in continuing fossil fuel dominance in this sector constitute one such opposition group. But there is another, equally potent brake on transforming the transport sector in the city. Some would cal l it “the law”,  as characterised in Germany’s Straßenverkehrsordnung  or StVO and the Straßengesetze or StrG’s. In practice, the job of ensuring that any new traffic proposals sit well with the StVO is carried out in Bremen by the Amt für Straßen und Verkehr (ASV).

Despite regular revisions, Germany’s StVO is still, at its core, based on the 1970s paradigm of the free movement (“Sicherheit und Ordnung”) of (motorised) traffic. Likewise, the Straßengesetze (StrG’s) which are decided by the Länder, comprise stipulations like e.g. the requirement “to build, enlarge, improve and maintain the streets, as required by the regular needs of the road users”. If those are car drivers, it is immediately clear to which  mode of transport the majority of street space will be dedicated. The officials who are tasked with ensuring their compliance therefore naturally prioritise this aim. And here the proponents of a Transport Transition have a problem.

Take efforts to calm busy Bremen streets to the advantage of local residents. How can we reduce the amount of motorised traffic in residential areas like the Viertel or Schwachhausen? Two approaches are widely recognised as successful, as long as they are combined with good quality alternatives like car-sharing, public transport and cycling infrastructure. One is the progressive reduction of car parking spaces.  Amsterdam and Oslo are successfully reducing traffic numbers with this approach. The other is to make through traffic less convenient through a network of one-way systems or setting up physical barriers to through traffic. Bremen itself implemented such a scheme in the Viertel in the 1980s, calming streets like Kreuzstraße and Bleicherstraße.

But little progress has been made since. The system of one-way streets and cycling contraflow was introduced in the 1980s by a combination  of a newly-founded and radical ADFC, and a highly motivated member of Bremen’s administration in the person of Klaus Hinte. Hinte introduced two new traffic forms that survive to this day – Cycle Streets and two-way cycling in one-way streets. But these innovations were restricted to relatively quiet residential streets. The traffic plan for the Viertel that was introduced in the 1980s maintained, and indeed strengthened, the roles of streets designated for through-traffic. As for the reduction of car parking, the issue is well covered elsewhere on this blog. Little has been done.

Why this is the case is explained in the city’s current Transport Development Plan. Five laudable aims such increasing cycling numbers, improving public transport and facilitating improved pavements for pedestrians sit alongside the sixth, key aim for motorised vehicles – improving the connectivity for “commercial traffic”. It’s interesting that the term “commercial traffic” is used. I know of no infrastructure in Bremen that exists purely for “commercial traffic” to the exclusion of all other motor vehicles. In fact the term is used to satisfy those interests – the Chamber of Commerce, the FDP, the ADAC – who argue that any barrier to motorised vehicles is a barrier to the economy. But in reality we are talking about motorised traffic as a whole. 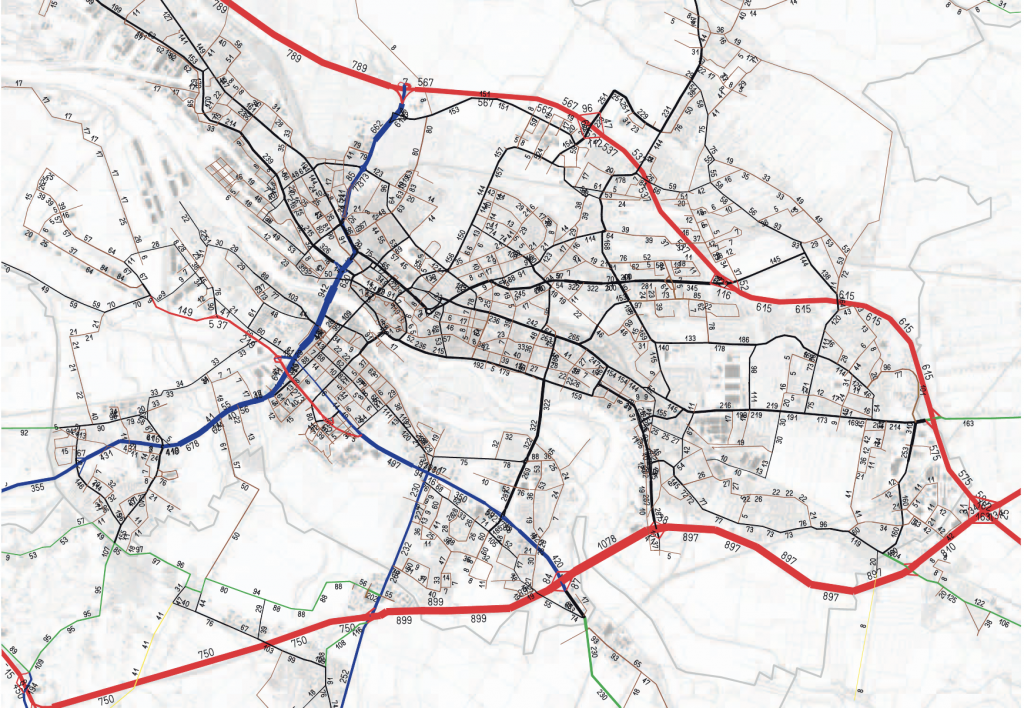 Thus, “key corridors” must be protected. These streets are conveniently laid out in the Transport Development Plan. From trunk roads (Bundesstraße) to main streets (Hauptverkehrsstraße) they serve a vital function in enabling motorised traffic to move freely.

So when the local council tried to reduce traffic on Sielwall in 2016 by proposing a partial one-way street, it was turned down by the ASV, on the grounds that Sielwall is a “Hauptverkehrsstraße”.

Thankfully, rules around parking are now being challenged, both locally and at a national level. The €30 limit on fines will soon be a thing of the past. But the free flow of traffic on those various trunk roads and main streets appears to be set in concrete, and will continue to prevent any moves towards a Transport Transition. As various local councils and NGOs work on plans for specific streets or districts, they are constantly blocked by this outdated paradigm. There is, however, a solution. Bremen needs a new Circulation Plan, designed to help, not hinder, the implementation of a Transport Transition. The system of main streets and trunk roads needs replacing with a traffic reduction plan that identifies and implements a range of measures already available.

Key elements of such a plan are already well known. The planned competition of the A281, for example, fully circling the city and its environs, negates any argument for through-traffic to travel into and out of the city. By hindering through-traffic, a dramatic reduction in traffic count would result.

Figures have been known for nearly 20 years. A project of the so-called Planungsbeirat Remberti-Kreisel in 2001 did a count of traffic on the Rembertiring, and found that only 30% was city-bound, the remaining 70% using the Hochstrasse to access farther afield, including the motorway network. A circulation plan that makes it impossible to travel across the city, only into it, will see a considerable reduction in city traffic.

Similarly, the reason so many lorries use Osterdeich is because it is a cheaper cross-town alternative to the motorway, where there is a toll for lorries. The solution? Make Osterdeich an even more expensive toll road for lorries.

How can inner city deliveries by lorry or van be reduced? By introducing a network of goods transfer stations around the city from lorry to cargo bike, as Oslo is implementing right now. In turn, as motor traffic in the city lessens,  streets like Sielwall, Humboldtstraße,  Lahnstraße and Parkallee, all current or planned-for Cycle Streets, can be made safer for cyclists and even blocked to through motor traffic. Bremen’s notoriously weak cycle street standards can finally be upgraded to genuinely safe on-road cycling. Such a plan needs to offer clear pathways to reducing motor traffic in the city, not simply NIMBY proposals for one street or district that displaces traffic elsewhere. Traffic reductions require shifts from cars and lorries to bikes, walking, and public transport. These can only be induced when using a car or a lorry becomes less direct, convenient and attractive, and more expensive than the greener alternatives.

Examples of Transport Transition – friendly Circulation Plans already exist. In the city of Ghent in Belgium, motorised traffic from residential areas has access to the city centre and back again, but not across to the other side. Anyone wishing to drive to the other side of the city must first go out to the city ring, then travel around. The Dutch city of Groningen established a circulation plan as far back as 1977. Here, the inner city is divided into four sectors. Each is accessible by car. But no car driver can travel directly from one to the other.

A similar plan for Bremen is clearly feasible, even before the A281 is complete – the missing tunnel really only provides a more direct route for motorway traffic from Bremerhaven heading to the west. There is already a perfectly feasible way around the city using the existing motorway network. A Circulation Plan with the Transport Transition at its heart will take substantial work, and will probably not be ready until the current Transport Plan runs its course in 2025. But work needs to start now. If not, each individual initiative to nudge the city towards a Transport Transition will come up against the wall of 1970s thinking.