Out of the Blue

The Neustadt, a densely populated district of Bremen on the south bank of the river Weser, is described in official literature as offering quiet streets with charming old houses. However, like so many other such areas, the charm is cursed by the demands of the car and its proponents. So when we, a group of local residents took the initiative to try to calm their streets, the hope was that the local authority – with a Green Party senator running the transport department – would look kindly on our efforts, but the reaction was the absolute opposite.

At the beginning of July this year, a blue marking appeared at the junction of two Neustadt streets, Lahnstraße and Biebricherstrasse, two streets that are home to many families. What had happened?

Frustrated by years of official procrastination we decided, as a group of local residents, to take action. In order to visibly highlight our campaign for safer streets, we covered the road surface at one of nine critical road junctions in Lahnstraße with blue paint. 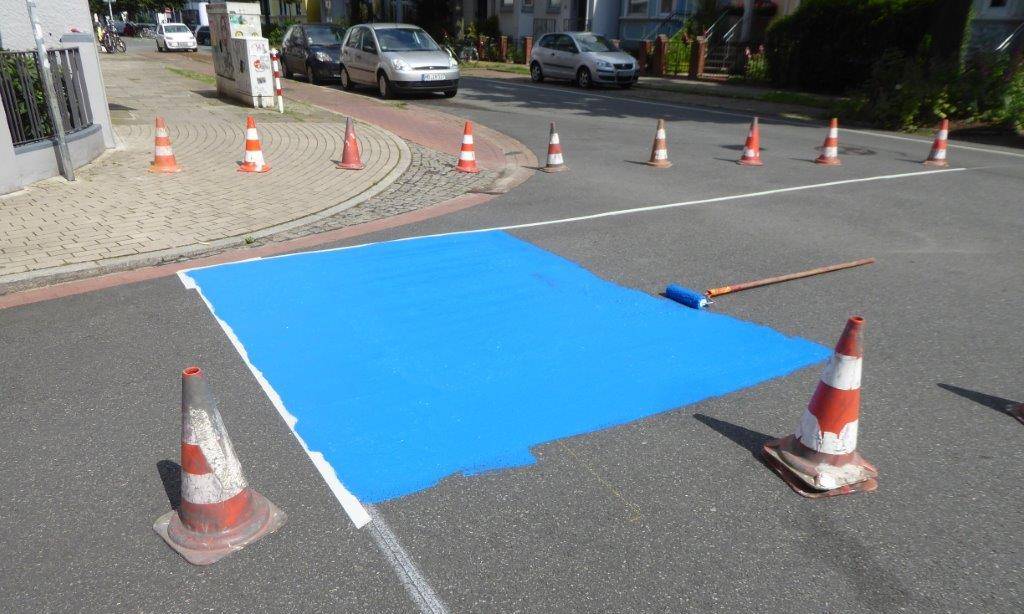 The result was prominently visible and  road users – in particular motorists on Lahnstraße – observably behaved in a much more prudent way towards cycle traffic and pedestrians, and they clearly complied more consistently to the right-before-left ground rule for such junctions.

A growing frustration had eventually led us to take the initiative:

So we decided to take direct action without waiting for the approval of the city authorities. The junction was painted blue to give an example of how one can increase road safety, especially for pedestrians and cyclists with simple, fast and cost-effective means. 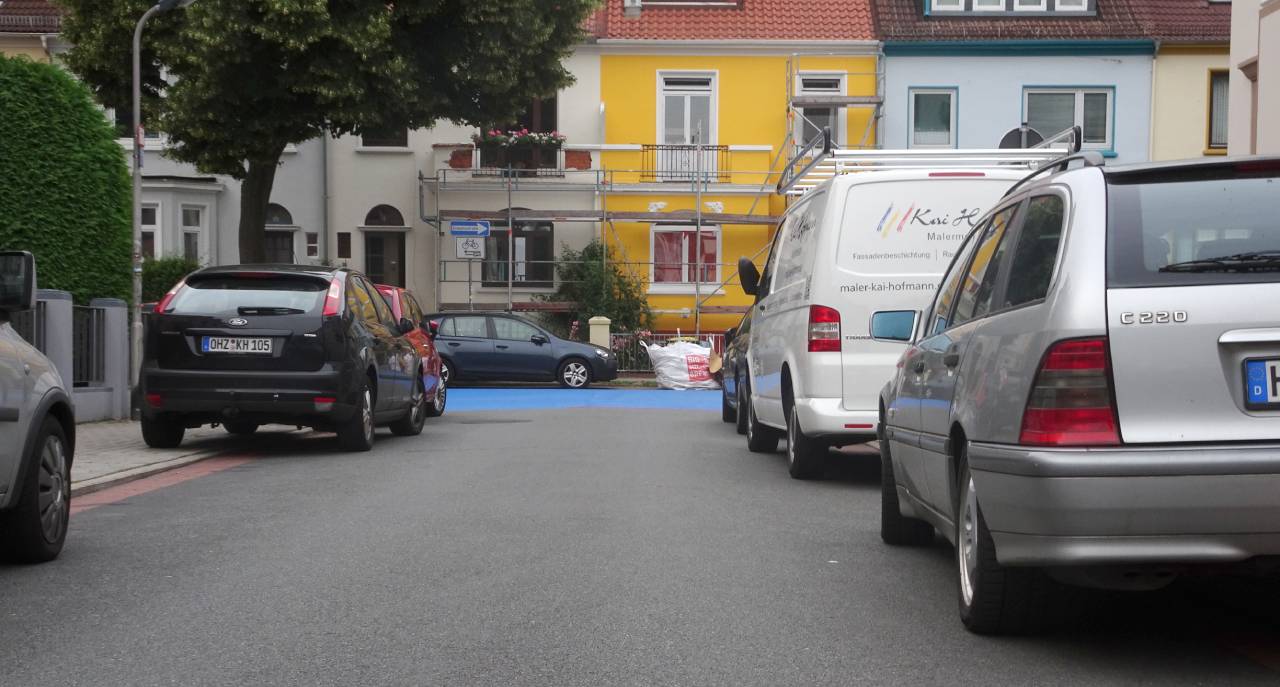 The response was massive. Approval and recognition of the legitimacy of the request to act, had usually been given by word of mouth and by personal letters to the activists. Rejection, on the other hand, almost always was given in writing by local authorities and in a clandestine way by irritated residents, as city authorities called them in public.

At this stage, Green Party Transport Senator Joachim Lohse could have sought a dialogue with our initiative and with the District Council. Unfortunately, there was not the slightest attempt; on the contrary, the Senator made it known through his spokesman that the blue marking represented a threat to traffic, that there was the risk of it irritating motorists, and that it was against Road Traffic Act regulations. Thus, the „highly busy“ ASV freed their valuable time and resources – fully backed by the Transport Senator – to announce the immediate removal of the blue colour, planned and executed without delay.

And so the blue markings were removed amid considerable interest from the regional media. With a haste rarely seen, the ASV, employing heavy road construction equipment, milled the blue marked area and reapplied a 3 cm layer of asphalt. The condition of the road is now as before, the city of Bremen having missed an opportunity for improving traffic safety at one of the many critical junctions in town.

For us, it is noticeable (coincidence or causal relationship?) that the local District Council has recently put new stress on its demands to the ASV:

In addition, we have got to know quite a few local residents, for whom the city authorities’ neglect of road safety is completely incomprehensible. Those contacts are going to be very helpful as we develop future projects.

We are committed to helping develop Bremen into a city of human scale, into a city that gives preference to cycle traffic, to pedestrians and to public transport, and into a city that takes its responsibilities towards climate change and future generations’ well-being seriously:

The events and communications pertaining to this post are recorded in some detail on our documents page. Of particular interest is our response letter to the Bremen Senator for Environment, Construction and Transport (currently only available in German), as it takes up a number of official statements made and scrutinzes them for inconsistencies and contradictions.