Cycling in Bremen – The Early Years 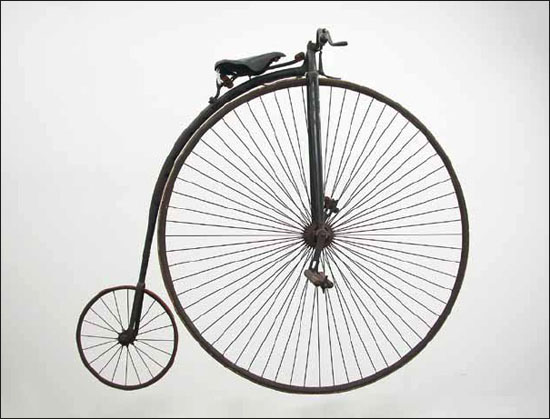 “I believe that if all Germans cycled, they would lose their dull sensuality and be happier and more agreeable.” (Ricarda Huch to Richard Huch 1896)1

“In no other city in Germany, are cyclists treated as humanely as here in Bremen” (German Bicycle Association meeting in Bremen 1897)2

One glance at Bremen, and you soon realise the importance of the bicycle. In Bremen so many people ride bikes. How come? Is it a Bremer tradition, its culture or the result of its flat topography? In the past we have put this question to a range of experts, including the city’s traffic department, and have still to receive a definitive answer.”This has always been so, Bremen has always been a cycling city”, is the most popular response. Yet a comprehensive understanding of why cycling is so important to Bremen would surely help answer a contemporary policy issue: “How can we get more people on the bike, as we lure them out of the car?” 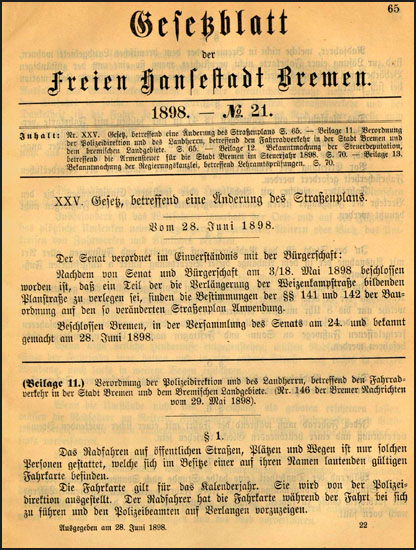 Following the World Exhibition in Paris in 1867, the first wooden Michaulinen appeared in Bremen’s parks along the route of the old city wall.3  They were commonly referred to as “quick feet” or “Velocipeden”4. Very soon they were followed by the high-wheeled Penny Farthing, or Ordinary. Although they were cumbersome and often dangerous due to their size, they were also very fast thanks to their larger wheels. The cyclist was also at eye level with horse riders, a not to be underestimated advantage at the time5. “It is said that the British and American visitors brought their bicycles to Bremen. Bremen merchant sons emulated them. (…) Soon there were so many Ordinary riders in the city that an association was formed among them. It is significant that German cyclists named their new association in 1881 the “Bremen Bicycle Club6“ – in English. 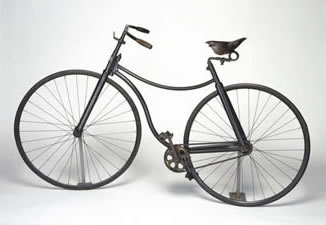 The use of these early bicycles, however, was hampered by the roughly surfaced roads. Animal droppings made them slippery, and the often steep camber made them dangerous. So cyclists on their Ordinary preferred to use pavements and paths. This was initially banned in Bremen in 18697, but this changed in 1884 with the city’s first bicycle law (Velocipedenordnung)8. Remarkably, this allowed cyclists to ride on the footpaths of the Bürgerpark. The prerequisite for this privilege were cycling tests and license plates. This regulation marked Bremen out as exceptionally progressive. For example, in Lübeck and Cologne pavement cycling was forbidden. In Cologne cycling on public streets and squares was completely banned9.

“Ten cycling orders were issued in Bremen between 1884 and 1908. In 1887, the conditions under which cycling on footpaths had been allowed in the Bürgerpark (permission card and license plate), extended to all shared pavements. In 1898, the law establishing driving on the right hand side of the road was passed. 1907 brought the implementation of the administrative regulation of the German Bundesrat for cyclists (…). As a result, number plates for bicycles were abolished10. “And in the early 1890s the Bremen Police Department, replaced the word” velociped” with the word “bicycle” (Fahrrad)11.

In 1885 the “Rover”, or so-called Safety, was invented in England12, known in Germany as the “low bike” (Niederrad) due to its lower seating position. The rear wheel was driven by a link chain, and when this was quickly followed in 1888 by Dunlop’s air-filled tyres13, the modern bicycle as we know it had arrived. This bike was “modern, sporty, offering mobility and freedom, overcame borders and also had the glamour of the unconventional.”14The modern Niederrad was an expression of the Zeitgeist, which questioned the strict bourgeois norms of the day. And once its production costs significantly undercut those of the Ordinary, the Safety would become an everyday means of transport15.

The early development of cycling was clearly supported in a special way in Bremen. Moreover, the Hanseatic city’s pioneering spirit was not restricted to the law:

“Bremen was among the first cities in Germany to establish their own tracks for cyclists.”16Interestingly, these were initially financed by the cyclists themselves. The German Bicycle Federation held its first national meeting in Bremen in 1897. “Prior to this event, Bremen cyclists organized a money collection for investment in cycle tracks. 5,000 Mark was raised, enabling the creation of several special bicycle paths in the Bürgerpark.”17Apparently the Bremen Senate were not keen to “splash out” on these first tracks. Within a year (by order of July 1898) they were building test cycle tracks – along Bismarckstrasse they created two good thirty centimetres wide strips in the middle of the road, whilst on Osterdeich two tracks on the sides of the road were built. On the Holler Allee and Park Allee, two riding paths were converted into cycle paths.”18

The first cycle paths along roads leading to the Bürgerpark or out to the countryside, were partly built at the level of the adjoining roadway, but the preference was for them to be elevated above the road. This was done not simply for cyclist safety, but also to protect the surface from animal cart induced damage.21There were obviously two main reasons for building cycle paths: “Many cyclists avoided bumpy roads and preferred to ride on smooth pavements. Cycle paths were built with the intention to avoid that.”19And the cyclists had to be protected from other vehicles: “These days breaks of motorised vehicles were not reliable, neither was this the case with carts and trams, to the effect that in dangerous situations they could not use their breaks efficiently or avoid other objects quickly enough. (…) So the improvement of safety was the second important reason for the installation of cycle paths off the roadway.”20

The situation in the inner city was different, where cycle lanes were built in the middle of the roadway. A number of these are still visible in individual streets in the Steintor district of the city. Both ideas – bicycle lanes in the middle of the road or on the outer edge – were discussed, and the latter clearly rejected. “Outer cycle tracks would be least advantageous (…) since parked carts in front of buildings would prove very disturbing for cyclists, and in wet weather the steep camber would prove slippery for the cyclist.”22Because of these obvious disadvantages, one metre wide cycle tracks were built in the middle of the road. And where there was plenty of room, the cyclists were given their own cycle track, raised from, and independent of, the roadway.

Where the local authority chose central cycle lanes, they opted for a technology that is still of interest today: “In the middle of the roughly paved road, a few rows of so-called Mansfelder Kupferschlackensteinen were laid. These were specially flat, smooth cobblestones, and were much more attractive to cyclists compared to a road’s normal surface. Since the bikes at that time were the fastest means of transport on the streets, the strip was in the middle of the road; in this way cycle traffic was less hindered by parked carts”.23The smooth Mansfeld cobblestones in the middle of the road – laid offset if possible – were very practical for bicyclists. They had their own clear space, could claim priority on the road, and didn’t have to jostle with pedestrians on the pavement. But it is important not to take this out of context. In 1900, the bicycle was the fastest means of transport. Priority was given to it. Today this is not the case.

A lot of ideas were explored in Bremen, but Bremen was not only one of the first cities to build cycle tracks. It did so more comprehensively than any other city. By 1933, around 20% of its pavements had cycle tracks alongside them. No other city in Germany had yet reached 10%.24 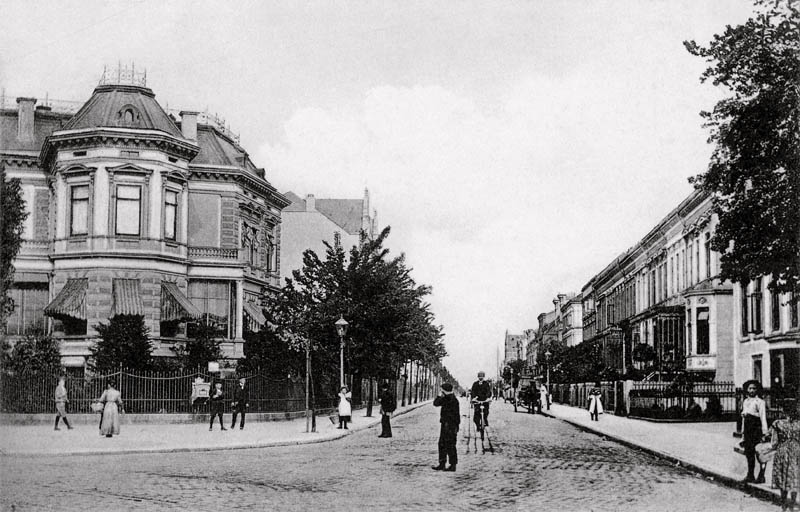 In Bremen many influences came together: We have here a Hanseatic city in front of us with international contacts and as a result obviously a positive attitude to new ideas and technological progress, which was reflected in the ready adaptation of “Velocipeden”.

Bremen was willing to deal tolerantly with the needs of their bicycle riders. Even in the age of the penny farthing, cyclists were allowed to use park footpaths, and later also the city’s pavements. In other cities, such as the also Hanseatic city of Lübeck or around Cologne, this was forbidden.25

And finally – initiated and funded first by the cyclists themselves – Bremen built the first cycle track, quickly followed by a number of types of infrastructure for cyclists: the conversion of bridleways, the raised, paved cycle track, the tracks on the side of the carriageway, and the flat cobblestone lanes in middle of the road.

None of this was standard policy in other German states. Thanks to that good start, Bremen is in many ways, today’s “Grand old Lady of Cycling”.

Cycling in Bremen – The Early Years