The climate crisis and need for a transformation to a sustainable traffic and transport system demand feasible concepts. The initiative “Einfach Einsteigen” (not exactly translateable, but close to Simply Enter; Get on (board)/hop on) has developed a calculated concept for financing the expansion and operation of Bremen’s local transport system. A role model for other cities as well?

Here is some background information on “Einfach Einsteigen” (hereafter abbreviated as “we”) financing concept for local transport as well as its assessment by the Bremen Senate. If the concept is implemented, the initiative claims, local transport in Bremen can be operated without tickets as well as comprehensively expanded.(Note:  this is operating  under  German  law)

What does it cost?

First of all a review: In January 2019 we presented our basic concept for a pay-as-you-go local transport system in Bremen. As an example, we calculated what it would cost if citizens and private companies were each to bear half of the costs of operating and maintaining an expanded, attractive local transport system, similar to the social security system. 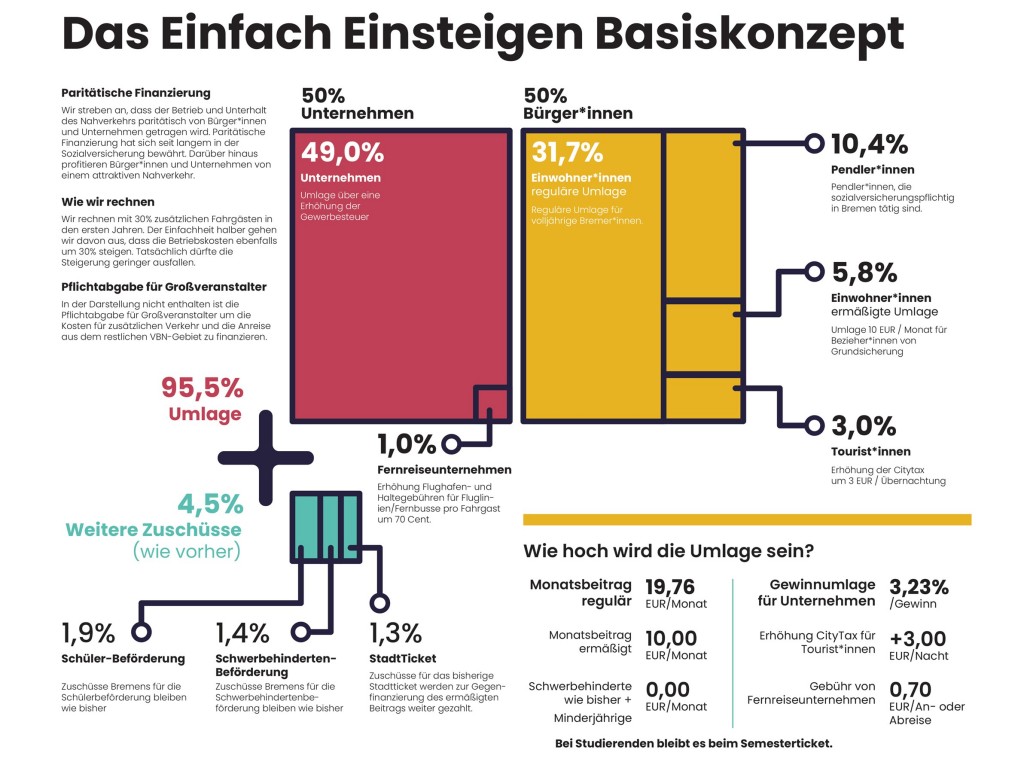 This will enable the city to invest the previous ticket subsidies in the necessary expansion of local transport. This means more vehicles, new stations and a dense tram network. With the climate crisis breathing down our necks, it is now time to restructure local transport so that people switch from cars to local transport.

We support all environment-friendly forms of transport

Of course it is necessary for the city to take parallel measures to make cycling and walking in Bremen much more attractive. We would like to strengthen the environmental alliance as a whole and co-finance the measures for cycling and pedestrians by a comprehensive parking management system. We are constantly presenting this concept and our proposals in public digital and analogue events, talking to politicians and people from specialist circles, administration, local transport companies or even the trade union ver.di.

We have already achieved a lot: a representative survey showed that almost 2/3 of Bremen residents are prepared to pay 20 € per month for the levy. Unfortunately, politicians in the coalition negotiations (as so often in Bremen) did not have the courage to say directly “we’ll do it!” Instead, the coalition government commissioned an audit in which our financing model is compared with other tariff concepts. Even though details still need to be clarified, we assume that the basic idea of equal financing of local transport can certainly be implemented if the previous subsidies for expansion are used. This is the essential point for us.

This measure, like other effective climate protection measures, must not be delayed any longer as part of a comprehensive turnaround in transport policy by ordering expert opinions, setting up commissions of inquiry or speculating about a referendum (see epilogue*) on the subject: Transport transformation and climate protection were central issues in the last election campaign. Politicians have been given a clear mandate that they must finally implement!

We see the transport transformation also as a cultural change, because car culture is difficult to overcome. We want to win people from different parts of society over to local transport and generate ideas for improvements in public transport from different perspectives. With this in mind, we have launched the school competition “Nahverkehr besser machen” (“Making local transport better”), the Public Transport Lab, the Barcamp Nahverkehr and the Hackathon Nahverkehr and support the trade union Ver.di in its efforts to improve working conditions. Further ideas and projects, e.g. also with artists and cultural actors, are in the planning stage. In addition to our financing concept, we are also organising a number of projects to bring about a change in peoples’ attitudes to local transport.

Epilogue on the subject of referendum

(*) It may surprise some readers why we take a critical view on referendums, which are good instruments but used far too rarely in Germany. But unlike in Switzerland, German politics has not created a good framework for referendums. Whenever the government talks about referendums, it often gives the impression that it does not want to take responsibility for a decision. If there were really an interest in the will of the voters, then the framework would be in place to enable regular referenda. As long as this is not the case, it is difficult to take any interest in referendums seriously.{:}